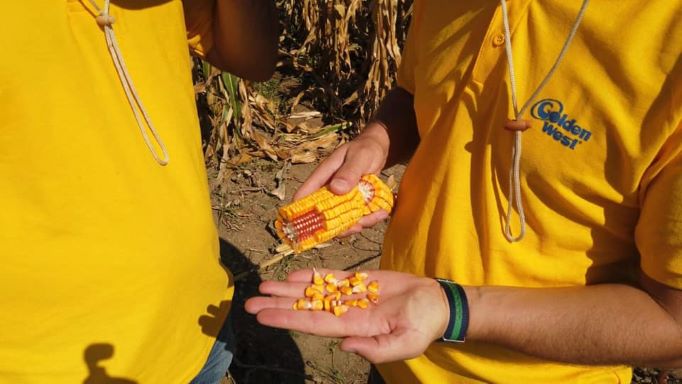 The Use of Multiple Security System (MSS) technology

The Corn Breeding Program started in the early 2000’s in USA. Till 2010 the program had been shifted from US and Bulgaria became the hub of the research activities for early and later also for late corn hybrids.

GWS breeding program is focused on two quite different directions:

The first one is the development of early corn hybrids from FAO 160 to FAO 499, which is centered in Ruse, Bulgaria and creates products with high tolerance to drought and heat stress
Second is the development of late corn hybrids from FAO 500 to  FAO 750 and its products are characterized with maximal genetic potential for yield. This direction is centered in Giannitsa, Greece.

The breeding of early corn hybrids is taking place in our stations in Bulgaria and Greece as basic and in more than 10 European countries as associated and collaborating. Annually the program conducts about 25.000 nursery plots in the main season and about 10.000 in Winter Nurseries in Chile, Argentina, Mexico and/or South Africa as well as up to 12.000 haploid plants. The number of yield test plots comes to over 80.000 and they are evaluated from Germany on the West to Kazakhstan at the East and from Poland on the North to Egypt on the South.

As well as the rest of the breeding programs in Temperate zone, our breeding programs also involve mainly germplasm from the US Corn Belt and classical breeding methods of its breeding. But knowing the key advantage of the corn products with high tolerance to drought and heat, our company developed and successfully applied in breeding of early hybrids, the absolutely unique, Multiple Security System (MSS) technology.

At MS System, a big part of the new corn lines is created by doubling of haploids, which, unlike the competition practices, is taking place under controlled environment of moderate to moderately strong drought and heat stress in South Africa, close to the border of Namibia. We prefer to successfully double relatively few but really drought tolerant haploids that will become the parents of our drought tolerant corn lines. The lines themselves, are also evaluated under conditions of drought and heat in Bulgaria, Greece, and South Africa. Under the same conditions the evaluation of their hybrids is taking place. Even when the corn lines are created by classical methods, all their strongly segregating generations are evaluated under drought and heat stress.

Unlike Golden West, all other breeding companies are only evaluating the drought resistance of their hybrids as one final action. As a result of the application of our unique MS System, we achieve an accumulation of genes determining drought resistance on haploid and diploid level as well as at the level of line and hybrid, i.e., along the whole breeding process. The effect of the application of the MSS is evident in dry years when the plants of our products maintain their fresh green status for 10 to 18 days longer than those of the other breeding companies. In this way, the plants prolong the period of utilization of even negligible water resources remaining into the soil on one hand, while on the other, being still alive, they can utilize efficiently any rain falling during this 10-18 day’s period, achieving sometimes amazing yields in comparison to the competition.

At the same time our products reveal excellent yield potential under favorable watering, so that they can successfully compete the best of the world’s breeding achievements. By applying our MSS products the farmers can achieve a secure and stabile corn production, sometimes higher than using any other hybrids. And this occurs on a fully competitive yield levels by a moderate investment in otherwise expensive seed materials.